Disclaimer: All the content posted here is strictly for educational purposes only. The author is not responsible for any harm caused using this content in any other way apart from the one intented.

The Intigriti Easter XSS challenge was open from April 13 to Aril 19. I know I’m a little late to the party but this challenge took a lot of time for me to understand. Like many, I couldn’t solve it during the challenge days and waited for someone to post a writeup so that I can follow along and solve it. But that someone was none other than our dear @stok! To solve this challenge, there are some conditions we’re given. Let’s start by looking at the hints and let the fun begin!

We are already provided with some Hints.

Why no self XSS ?

The need for an external delivery mechanism for the attack means that the impact of reflected XSS is generally less severe than stored XSS, where a self-contained attack can be delivered within the vulnerable application itself.

OK, so we want the impact to be more severe, hence no self-XSS.

The second hint and the most important one to note - Should bypass CSP. Hmm sounds cool. But what is CSP?

Content Security Policy (CSP) is an added layer of security that helps to detect and mitigate certain types of attacks, including Cross Site Scripting (XSS) and data injection attacks. These attacks are used for everything from data theft to site defacement to distribution of malware. CSP is designed to be fully backward compatible (except CSP version 2 where there are some explicitly-mentioned inconsistencies in backward compatibility; more details here section 1.1). Browsers that don’t support it still work with servers that implement it, and vice-versa: browsers that don’t support CSP simply ignore it, functioning as usual, defaulting to the standard same-origin policy for web content. If the site doesn’t offer the CSP header, browsers likewise use the standard same-origin policy. To enable CSP, you need to configure your web server to return the Content-Security-Policy HTTP header (sometimes you will see mentions of the X-Content-Security-Policy header, but that’s an older version and you don’t need to specify it anymore).

So, the site here has enabled CSP and we;re asked to bypass it.

Heading over to the Dev tools - (the fun part) - Press F12 -> Network > select our URL under the name ‘challenge.intigriti.io’

We see the content-security-policy: default-src ‘self’ - meaning a web site administrator wants all content to come from the site’s own origin (this excludes subdomains).

To know more about the CSP being implemented we can go to https://csp-evaluator.withgoogle.com/

Paste the site’s url https://challenge.intigriti.io/ in the box and click Check CSP. It evaluates the CSP for us. 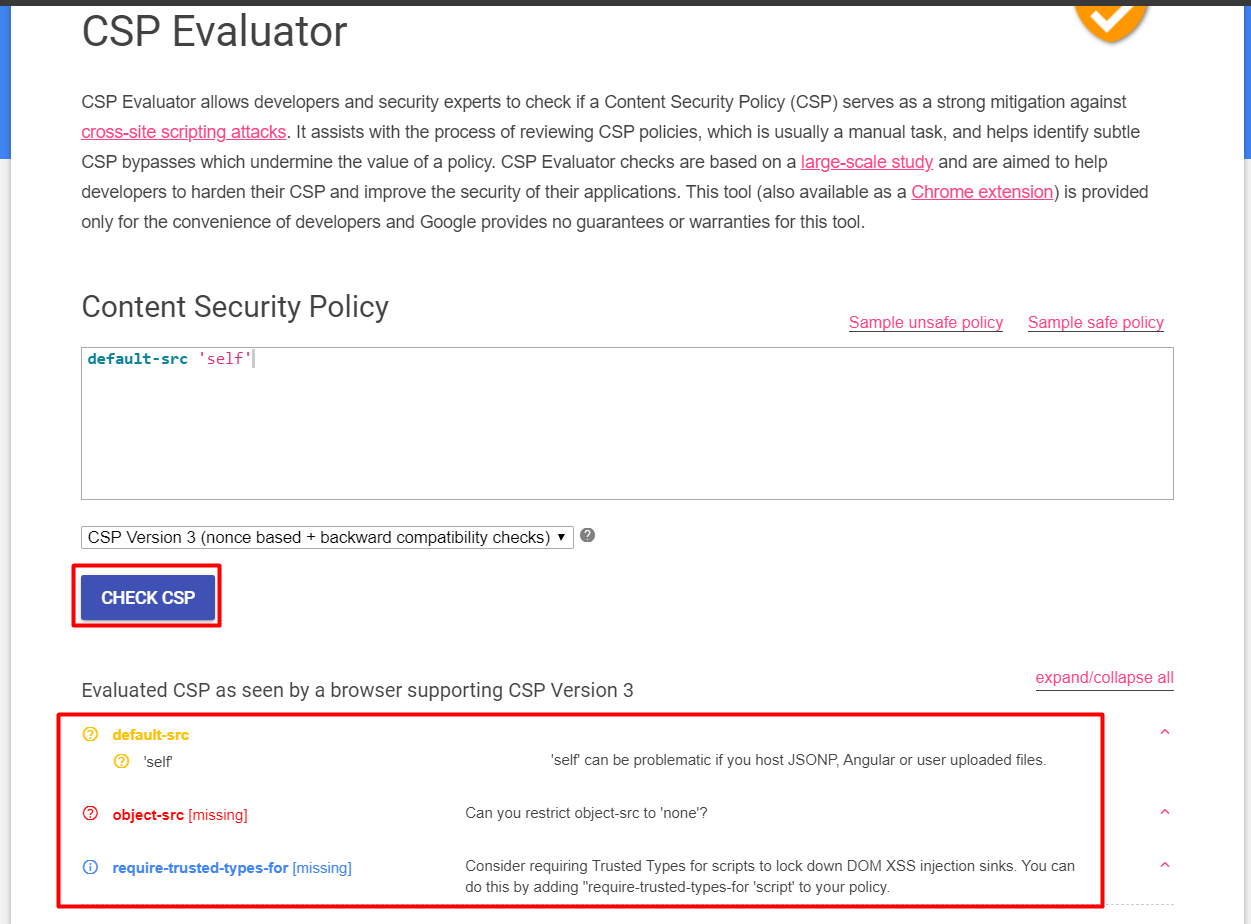 The ‘object-src’ is really for older browsers so we can ignore it.

We can just write an alert("@inti and @stok rocks!"); to check if the js is running correctly. We see the sweet pop-up.

But we need to bypass the CSP in order to solve this challenge.

so the final script ->

Not allowed, as it violates the CSP directive.

The ‘alert’ code will not be on the server so will not execute as per the CSP directive the site implements.

So, it is confirmed that the CSP bypass payload must be on the site’s page https://challenge.intigriti.io/ and not somewhere else.

Let’s start looking around for some interesting stuff. The page contains a dropdown list - 6 options are inside and the description is printed right underneath it.

We can also observe the ‘/#3’ on the URL bar. Here - 3rd option is selected and as per the JS code it will return that {option_no.txt}. And we know that the no. of options are 6.

Feel free to ZOOM-IN if you can’t view the screenshot. 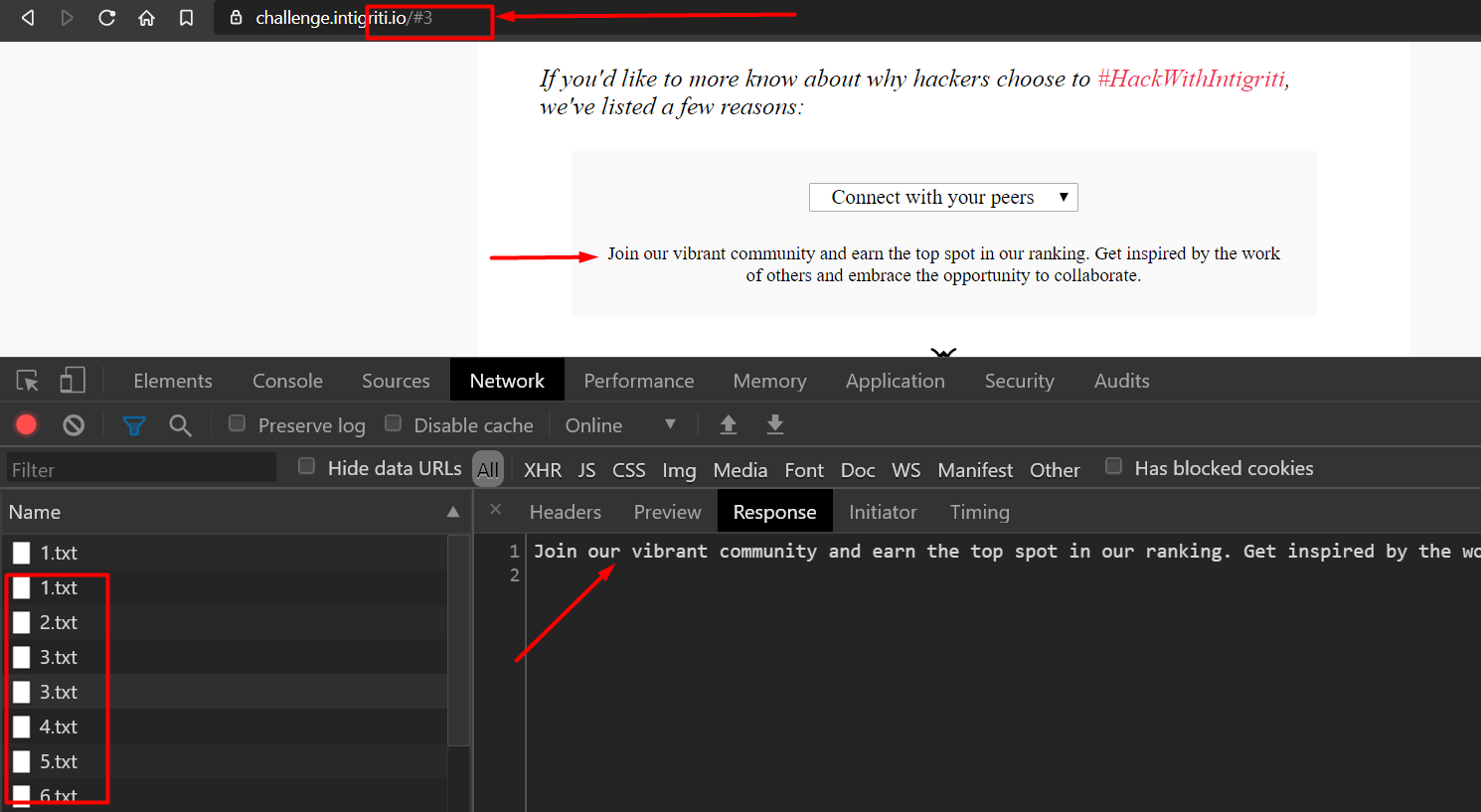 Can we write something else than 1 to 6 here?

I literally tried writing something_else and after a hard refresh (ctrl+shift+R), we see an error message 404.

But if we observe closely, it is not a valid 404 error page, it’s just some text returned by the JS code.

It looks normal at a glance but looking closely, we can see that ‘404’ is an integer and the ‘-’ sign followed by the ‘string in quotes’. So let’s check if that returned text is valid JS or not in our dev tools console.

Just copy-paste the text in the console and hit enter

We don’t see any error message except the strange NaN - standing for ‘Not a Number’, meaning the JS is absolutely valid here. The 404 is coloured and so is the string. But the result of this JS code is NaN because ‘we’ are trying to subtract a ‘string’ from an integer which is impossible.

Moving on, I just double clicked on our something_else.txt to bring a new tab for injecting code directly on the URL bar.

So till now we have a valid javascript code with us only with a NaN. That’s fine for now.

Next, we’ll try to add a JS code that makes some sense -> an alert() maybe?

It works! We have the sweet pop-up again.

I appended this on the URL ->'+alert(document.domain)+' -> we still get the 404 JS message but when we copy that JS in the console, we see the pop-up! 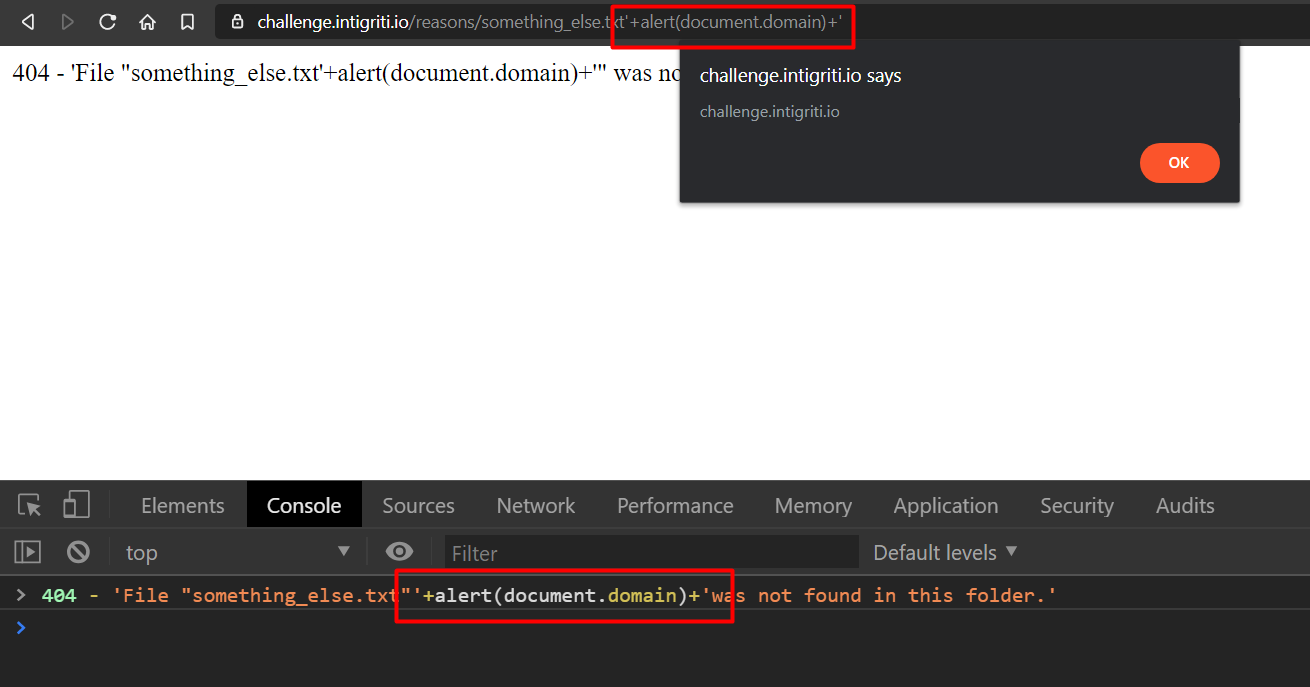 Observe the difference between the 2 lines -> the first gave us a NaN for subtracting string from a number but the second line did not show us any error and rendered the alert box.

Going back a bit we know that we don’t want self-XSS and must do the CSP bypass.

Let’s replace the script tag contents in the cspBypass with the URL containing the alert() code and run it.

Struggled a lot here because it was just not working.

Then it struck me that I was using ‘+’ that means string append. Maybe JS is not considering this a valid string and not rendering it, so I replace it with a ‘-’ and it worked!

I ran it twice for it to work. Strange behaviour sometimes.

So the final payload ->

Maybe due to the earlier result, JS was not triggering the alert when we tried to CSP bypass it.

I thought that the challenge was over here for a second but I learnt that till now, we have done only a POC for the CSP bypass but we still have only a self-xss.

We have the innerHTML parameter of the Element class 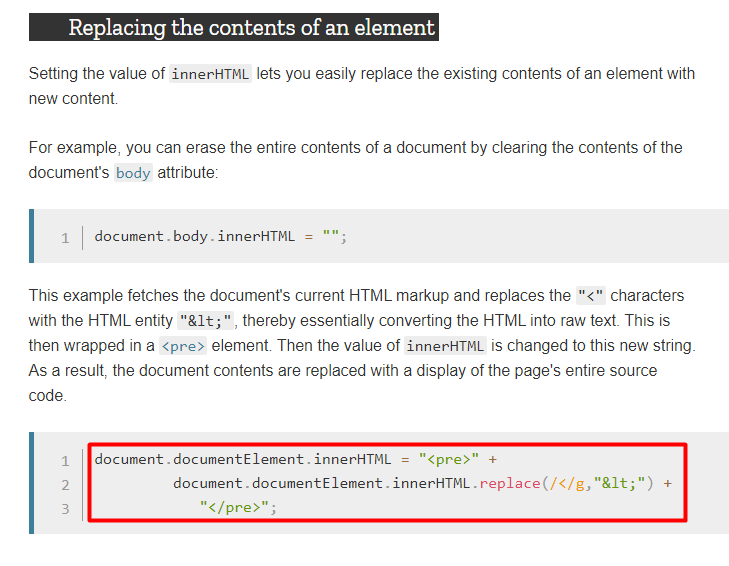 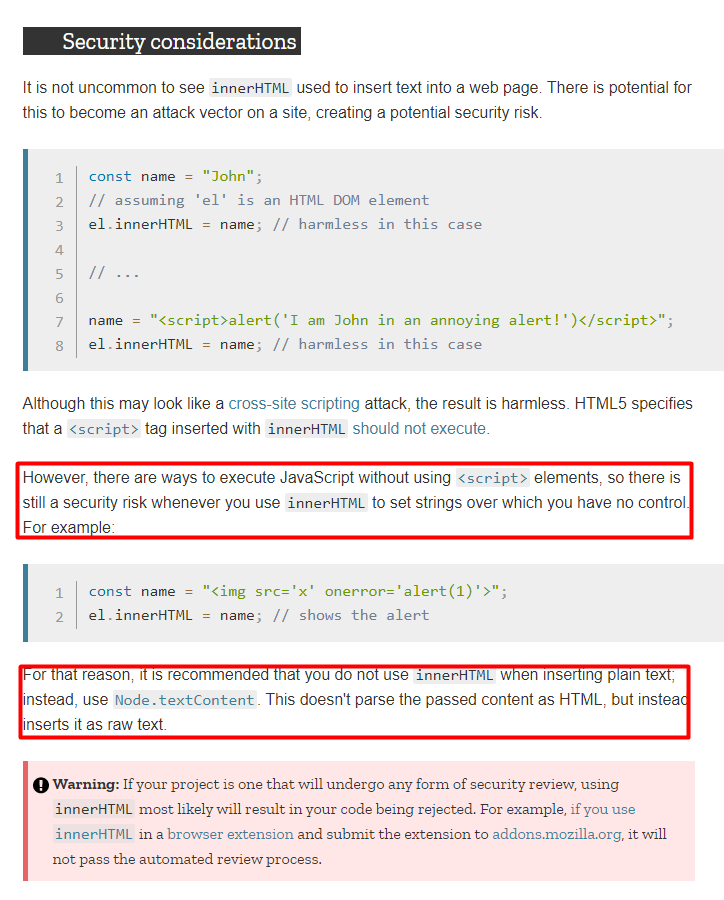 With all the above information, remove the document.write() and add the reason variable into our code and pass it the cspBypass.

It seems that it doesn’t load external scripts and features. We must invoke it after the page has loaded.

An <iframe> maybe? The <iframe> tag specifies an inline frame. An inline frame is used to embed another document within the current HTML document. With the <iframe> we will use the srcdoc attribute for the HTML injection in order to perform XSS from the server side (stored).

We will do this as follows - In the JS console -

We get the following result ->

It did not work earlier.

Rest assured, I have fixed it in the above code already. A big lesson learnt - always pay attention to the syntax.

As we can see after running the above script, we have an iframe which contains our XSS payload but we can’t stop here we have to make an HTML injection to exploit it. 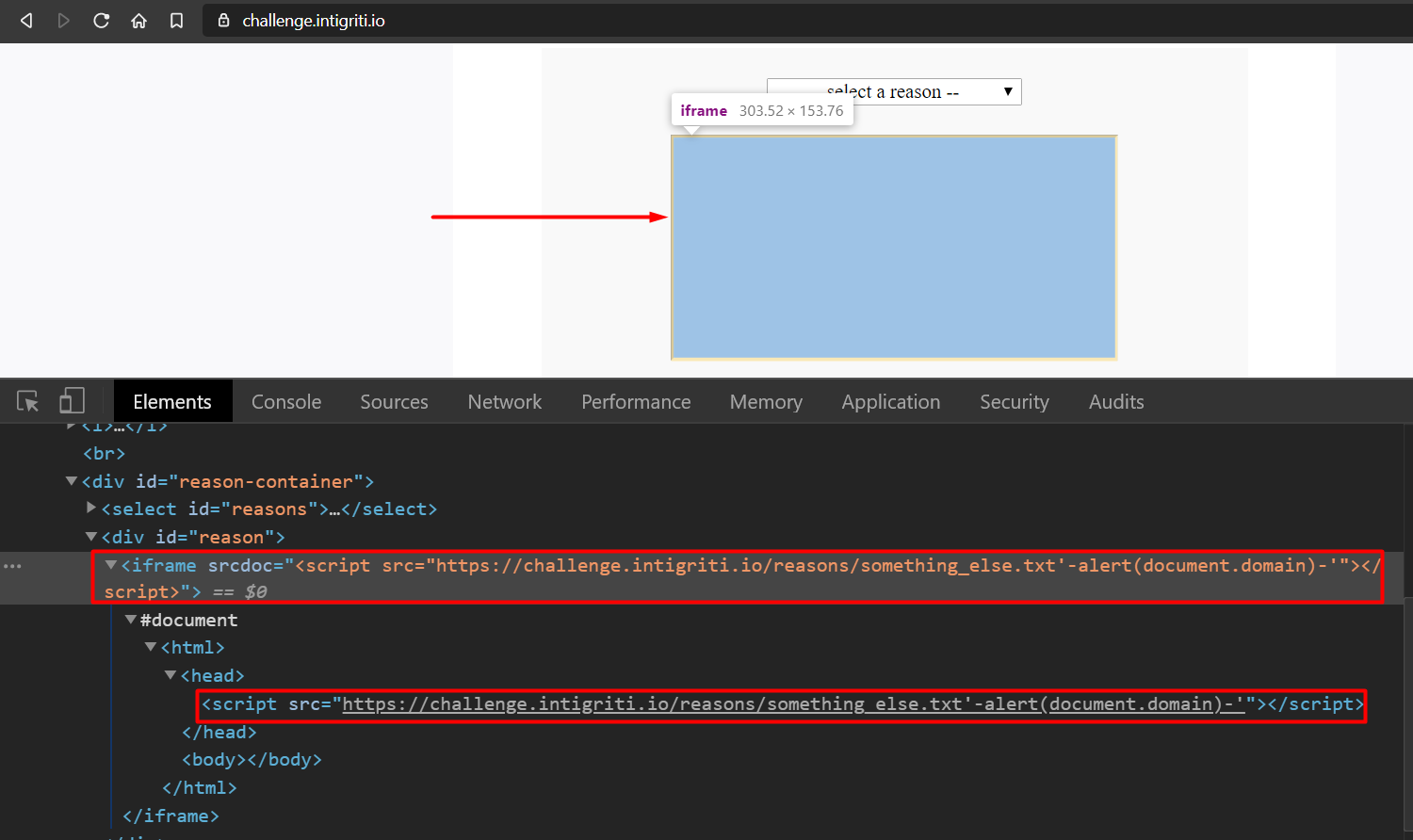 OK, so where can we have our our HTML injection?

Earlier, we had got a 404 message which contained only JS code.

How can we get a similar message - only this time a real one - when we try to access something which is not present on the server?

An .htaccess (hypertext access) file is a directory-level configuration file supported by several web servers, used for configuration of website-access issues, such as URL redirection, URL shortening, access control (for different web pages and files), and more. The ‘dot’ (period or full stop) before the file name makes it a hidden file in Unix-based environments. 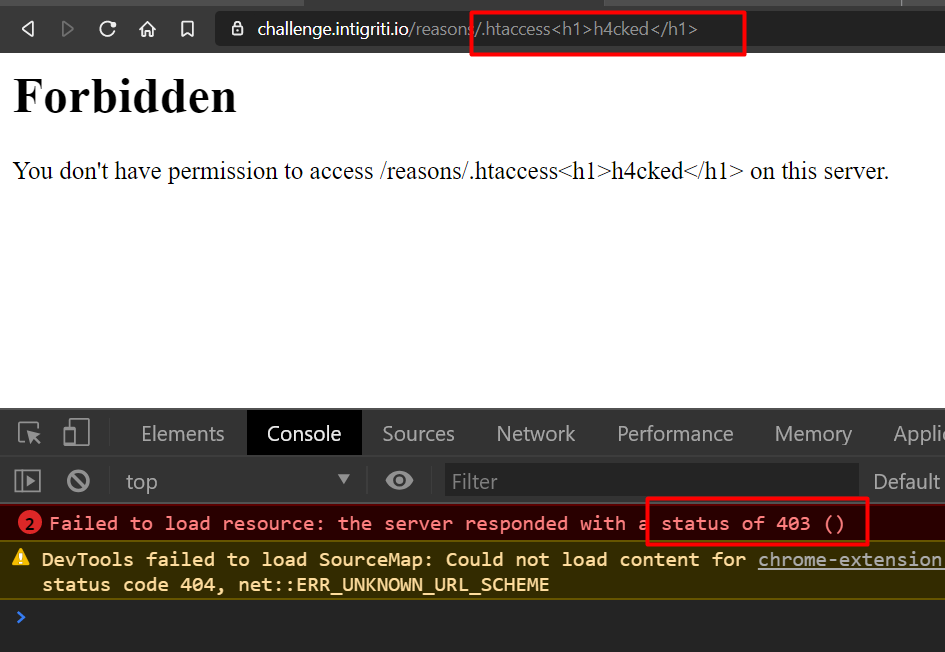 I tried to also put some JS and it did not run here. It took it as plaintext.

How can we bypass that? We go back to the script.js and observe that the script is using unescape() to decode strings. 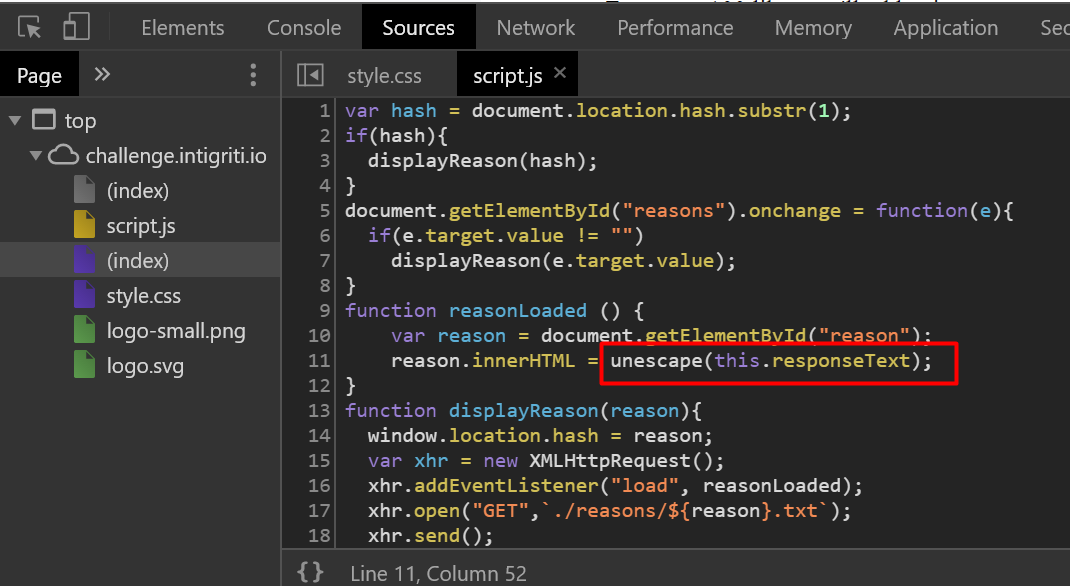 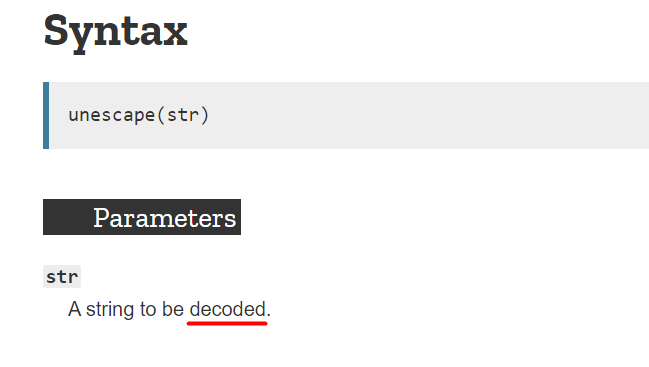 Now, the browser by default single-decodes characters in the address bar so in order to trick the browser we must double encode the URI component.

So till now, we could bypass the CSP, get the iframe for HTML injection. But when we try to inject HTML it won’t execute, as it requires decoding we discussed above.

For Demo purposes looking at the homepage -> 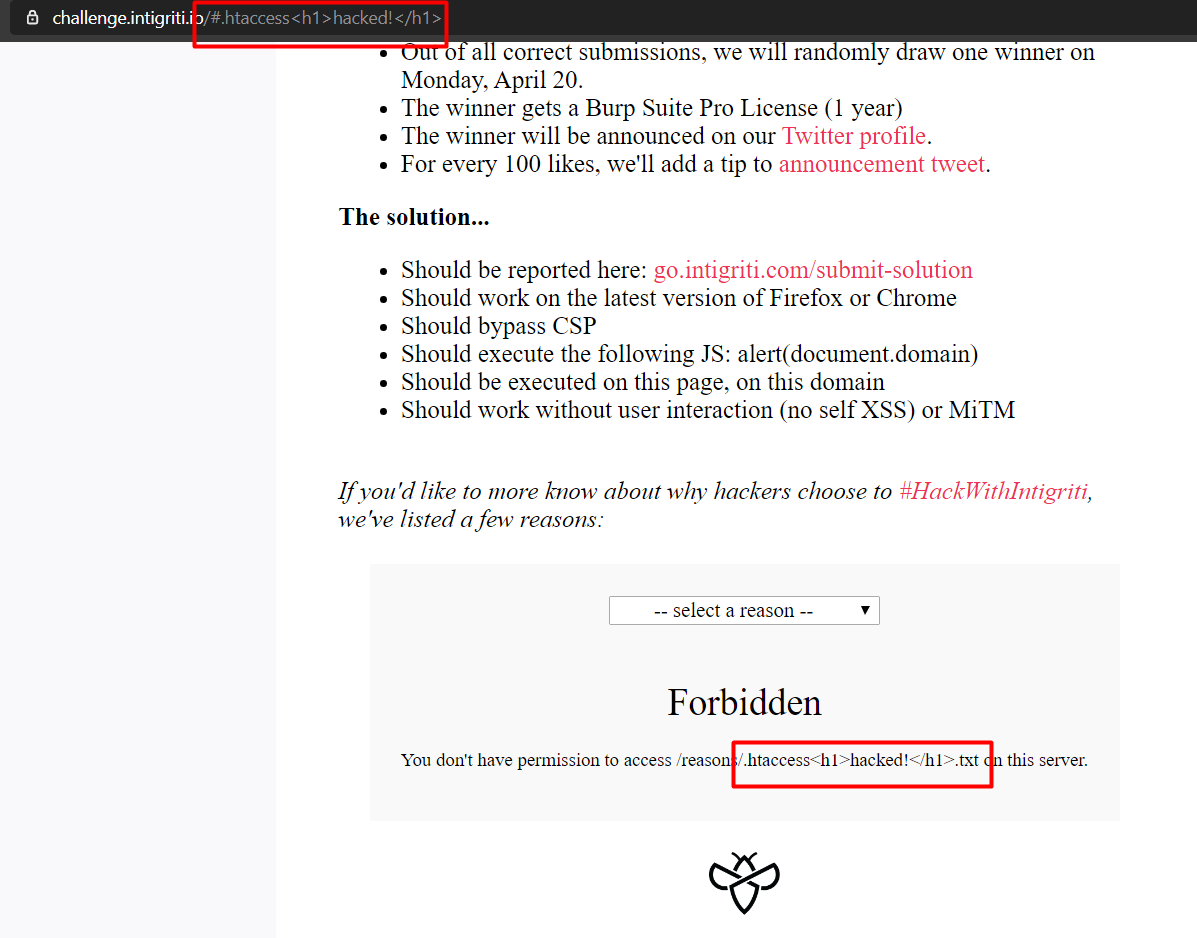 To solve it, we have to define 2 functions and give 1 call. That’s it.

After calling the getXSS function, it opens a new tab and it triggers the XSS!

We have solved the challenge!

I hope you all enjoyed this and learnt something really cool!

A big-big shoutout to @stok and @securinti for simplifying this Himalayan challenge! I had watched the video at least 13-15 times while taking notes and watched again while writing this blog. That’s why it took so long for this post.

Please provide your feedback if you like it or have any suggestions.

Many thanks once again.

Good-bye until next time.

This work is licensed under a
Creative Commons Attribution-NonCommercial-ShareAlike 4.0 International License